A couple of months ago, the PR team behind Gumtree got in touch about their new daily deals site. Here’s my (very overdue) review of their daily deals, and how they compare against the likes of other daily deal sites like Groupon, Living Social and Wahanda.

Can you believe that just a few years ago, we’d never heard of daily deals? They’re now so ingrained in our lives that most of us tend to search thesel sites before we book a spa day, meal out or gift. While Groupon, Living Social and Wahanda used to be the main players, we’re now seeing daily deal sites pop up from eBay, Qype and now Gumtree.

So, how does Gumtree stand out from the crowd? Rather than going for experiences, Gumtree tends to focus on products. There are the odd service-based deals (currently they’ve got a restaurant deal along with the iPhone charging units and USB keys) but it’s mainly product-based. The great thing about this, is that it opens it up to those of us who don’t live or commute to London every day (where, inevitably, the best deals tend to be).

I was offered the chance to try out one of the deals. I plumped for an offer for a pair of shoes. Like most of the other sites, it’s fairly straightforward to buy – just buy the deal then the voucher is emailed to you once the daily deal is finished. I had a couple of minor issues with my voucher number not working, but this was cleared up quickly. 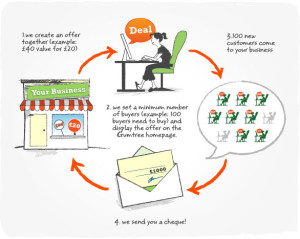 My order arrived a few days later, although the box was pretty bashed up when it arrived. I’ve passed that feedback onto the PR, so hopefully they can let the business know about the questionable courier service. The shoes are lovely though, great quality for the deal price.

Overall, it’s a good daily deal site if you prefer a gadget to yet another teeth whitening deal. Like Buyapowa, Gumtree turns to its community to find out what they’d like to see as part of their daily deals (see their Facebook page for more info).

I do think the biggest issue daily deal sites face is maintaining a high quality of products and services. When a small business sells a large number of deals, quality can give way to quantity. A bit of education for the small businesses, and some high standards when it comes to choosing who Daily Deal sites work with, can go a long way to repairing the reputation of this type of shopping. Hopefully Gumtrees community-based deal sourcing will go some way to help with this.