Do you believe in luck? 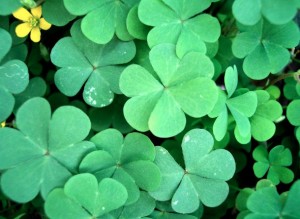 Ever been told you’re lucky? I’ve heard it a few times recently, especially now I’m going back to freelancing. Generally it’s said with good intentions, along the lines of “You’re so lucky to do what you do” or “You’re lucky to work from home”. But I can’t help feeling mildly irritated when people say it.

Here’s the thing: I don’t believe in luck. Not really. It’s phooey. I believe in chance, but luck seems a little lazy. Like we’re all waiting for life to land in our laps and have no control over our own lives. It’s all a little patronising – as if you did nothing more to deserve something other than be lucky.

My thinking is, ‘lucky’ people tend to have an optimistic outlook on life, make decisions based on common sense and yet be open to taking the odd risk too. Bad things happen to them too, but they might be able to see that silver lining more – or at least learn from it. Perhaps ‘lucky’ people are more grateful for all the things they’ve achieved so far – while unlucky people count all the reasons why they’re not grateful. Can you think of many successful entrepreneurs who have a pessimistic view on life?

Derren Brown’s The Secret of Luck

Recently, Derren Brown had a great series of programs called the Experiments that looked at human behaviour (well worth watching, even if you’re not a Derren fan). The one that caught my interest was The Secret Of Luck (4OD link here if you want to watch the whole thing before I spoil it in a second).

Derren discovered that people in the village he visited considered themselves either lucky or unlucky. However, further tests proved that those who were ‘lucky’ were the ones who were more open-minded to opportunities and therefore had more chance of being lucky. When he targeted one of the unlucky men and explained this theory, his outlook started to change and he became ‘luckier’.

What do you think? Do you believe in luck?

p.s Funnily enough, just as I was writing this, Mayi Carles’ latest video popped up in my inbox on a very similar theme! Watch the video from about four minutes onwards for her take on luck and what kind of characteristics do ‘lucky’ people have.