10 Things That Have Helped Me Boost My Business in 2014 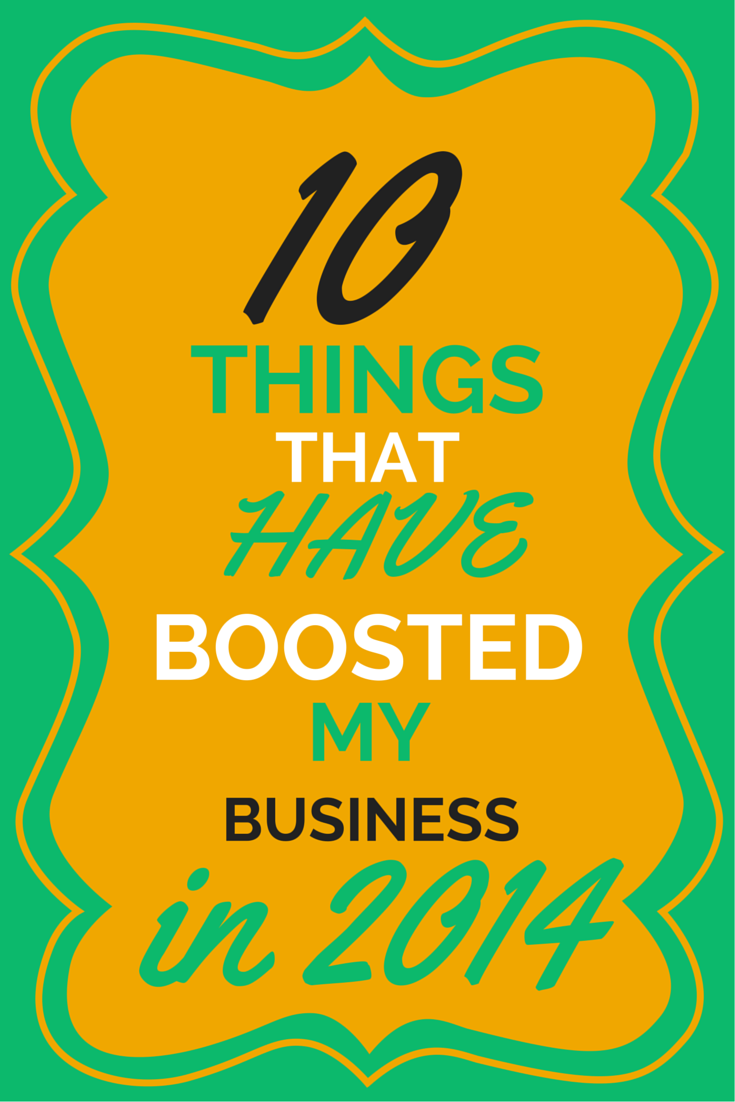 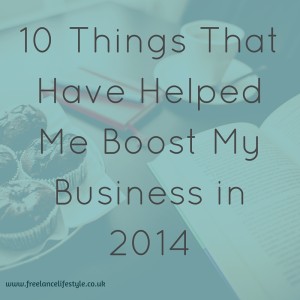 It’s reflection time people. That time of year when you look back on the year, try and remember what the hell you’ve done and work out what you want to do differently in 2015.

One of my favourite things about being freelance is the number of options available, which means no one year is the same. For me, this year was challenging in good and bad ways. It definitely felt like a trickier year, although I suspect this is down to growing pains leading up to becoming a a Limited Company in September. I’ve realised that when I approach the edge of my comfort zone, I have a tendency to self-sabotage which stops growth. This year has definitely been about moving beyond that.

The first half of the year was focused on building up my coaching and training skills, something I’ve really enjoyed. It was also the time of year in which I launched my online ecourse. I signed up for some new mentoring groups and some more 1-2-1 coaching, something I plan on doing a lot more of in 2015.

The second half was full of good news, but challenges too – from October the nausea and tiredness of pregnancy kicked in and I pretty much had to write any new plans off until the new year. Taking a break, while frustrating, isn’t necessarily a bad thing though – it’s the perfect time to reflect and work out what I was really excited about returning to. The last half of the year was also the time when I became a finalist in the 15 for 2015 freelancers, a competition run by IPSE.

I set myself an income goal this year, and fell slightly short – mainly because I lost the last three months of the year to hiding under the duvet. I still saw an increase on last year though, and I feel like I’m in a much better position going forward. Next year, my focus is on growing the business and making it as flexible as possible before the baby comes along. I love thinking about a fresh new year.

There are a few people and tools that have really helped me boost my business in 2014.

Jo Gifford and the Dexterous Divas and Dudes

I’ve known Jo through Twitter for years now, but this was the year I joined her Dexterous Divas and Dudes group (it’s free!). Facebook mastermind groups really took off in 2014, but I ended up leaving quite a few as there was either too little engagement or too much spamming from members. Dexterous Divas and Dudes is a group of online entrepreneurs asking for advice and helping others. On top of that, there are weekly promotion opportunities, mindfullness topics and workshops to learn more. I’ve made some great contacts through this group, and the workshops in particular have been very valuable.

Lucky Bitch, Denise Duffield Thomas’s program and ebooks, have made the biggest change to my money mindset this year. The biggest mindset shift was the guilt over wanting to earn more -the idea that it was ‘greedy’. I’d highly recommend her audiobook on this topic.

2014 was the year I realised that ecourses are brilliant up until a point, and then your money is better spent on 1-2-1 consulting. A 1-2-1 session with Sile Walsh left me with a notebook filled with notes and a head filled with ideas. She’s very intuitive and spotted the obvious blocks in my business straight away. Easily worth the money I invested.

This year, I invested in the Leonie Dawson planner, and I’m really enjoying filling it in and reflecting on the past year as well as making plans for 2015.

Carrie Green is probably the closest we’ve got in the UK to Marie Forleo, and her Members Club is one of the best investments I’ve made this year. For $25 a month, I get a new bundle each month, on topics ranging from doing your own publicity to running successful Facebook adverts. Her Facebook group is also a really friendly and helpful resource. The price goes up in January, so you might want to sign up now before it does.

I’ve been writing for The High Tea Cast for a year or two now, and the Facebook group of other writers has been brilliant for both offloading during stressful times and sharing ridiculous/funny things. Having that support group has been vital this year.

Onto the tools! I’ve finally embraced Evernote this year, after the realisation hit that you have to approach it with an all or nothing mindset. These days, I use it to scan in any correspondence, save favourited Tweets, create weekly plans, save PDF/ebooks and write blog posts. It’s a vital tool for my business and I couldn’t work without it.

Plus, it gives me the illusion of organisation. Hurrah!

Buffer has upped their game this year with the introduction of their suggested content, and in turn its really helped me keep on top of my social media. I’ve seen a real jump in numbers on my social media accounts, and I really think a buffer has contributed to that.

Another tool I played around with last year but only fully embraced in the last few months. I HATE dealing with my email, but have a nasty habit of constantly subscribing to things. Unroll.me keeps me sane by rolling up all the non urgent emails into one summarised email.

Finally, Jo Gifford introduced me to The Email Game, an online tool to tear through your emails when you’ve let them slide for a few days. If emails are slowing you down, a couple of sessions with this online tool a day will help you keep on top of things.

So, over to you. What groups/people/tools have helped you boost your business in 2014?